WATCHING THE TIDES ROLL AWAY

"Just like moons and suns, with certainty of tides

Challenge: To walk 190 miles along Wainwright's Coast to Coast. The most popular long distance trail in Britain and one of the world's greatest walks, from the Irish Sea at St. Bees Head, to the North Sea shoreline at Robin Hood's Bay.

The North Head is the most westerly point of Northern England. Urgent Met Office issues severe warnings, preparing the nation for storm Ellen’s imminent arrival. In a few hours, the UK’s west coast will be lashed by heavy rain and gusts of potentially 70mph (113kmh) in exposed western locations.

Standing by the high sandstone cliff I rest the heavy backpack on the ground.

‘Will the weight weaken my strength and spirit?’ I wonder. The turbulent Irish sea is a symbol of struggle and resilience and a testament to what lies ahead. 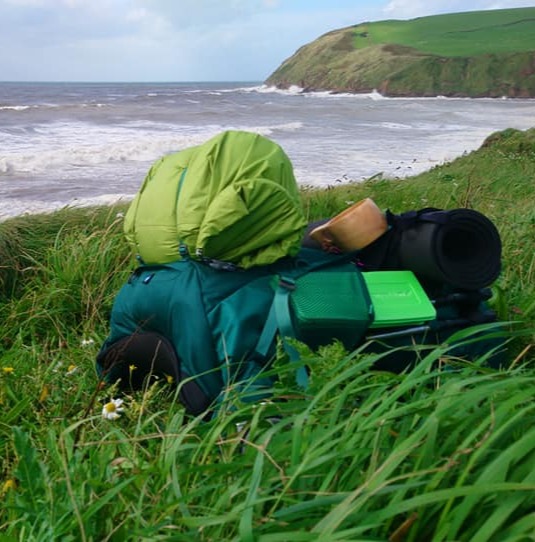 I don’t like planning the finest details, it’s nice to leave some things to destiny. This process helps stimulate the creative part of my brain especially when hunting for my next spot to call ‘home’.

'Mocking' is slang for hammocking. It suggests slowing down and connecting with nature while swinging from trees; in my case in a portable parachute hammock.

For this plan to work a couple of trees to secure the equipment and the tarp are essential. Finding strong fixing points in my surroundings isn’t always possible in this torrential weather. My back-up plan involves a bivvy bag (a simple waterproof cover for the sleeping bag with a mat underneath it). Some nights I’m luckier than others but regardless of the setup, the minute it’s ready, pooch jumps inside and claims ownership.

The thunderstorm on my first night in Cumbria turns night into day. Sleeping in a hammock in such a discharge of electricity and shock waves is thrilling, though at 1 am I question if I’m in the wrong place at the wrong time. A human being conducts electricity better than a tree, so theoretically if the tree gets struck, the lightning could easily jump to me.

Did you know? It is estimated that a lightning strike hits somewhere on the Earth's surface approximately 44 times every second, a total of nearly 1.4 billion lightning strikes every year.

My gut tells me to have faith. "You’re not on a peak or a hill, you’re not underneath the tallest tree. Your feet aren’t touching the ground, the ground current shouldn’t affect you". It’s important to go beyond what we can't control. I relax and savor this exhilarating moment for what it truly is: Another one of nature’s wonders.

Slugs, earthworms, and stinging nettles become the predominant feature on my wild camping spots. With a plethora of streams and rivers running nearby, collecting water to wash and cook is simple. Sometimes I add a chlorine tablet to my drinking water and others I boil it. The days I am able to collect rainwater using the tarp ends I feel glorious in my victory; a sense of being invincible that's integral to my soul's growth!

Life has taught me that not everyone will appreciate my adventures. Such was the case on another stormy night when in no uncertain terms I am ordered to leave from a spot I consider a ‘good one’. With my tail between my legs, I pack and go.

Soon after, a kind Samaritan invites me to pitch in his garden. It’s true what they say: that the most incredible thing about miracles is that they happen. With no trees, the walking sticks supporting the tarp are repeatedly knocked down by the thunderstorm. I curse into the wind in the name of all Gods I can recall. This isn’t about suffering, it’s about problem-solving and how one chooses to respond to what life throws their way. I don’t believe I am defeated; at midnight I resort to moving into a log store. The sides are exposed and the roof is broken. The weak skeleton frame provides little shape and strength and is filled with construction debris, a plastic sheet covering this. I secure my tarp against the howling wind and rain with large rocks. In the following hours, I catnap, my mind traveling to a particular day a decade ago.

I am pushing my daughter in a rickety baby stroller, the wheel is off again. A gentle kick with the heel of my shoe and I resort to carrying on. At the counter, the total doesn’t add up despite having carefully calculated the prices of every item in the basket. A kind stranger in the queue offers to cover the £0.50 difference. No words can communicate what goes on in my heart nor express the depth of pain and embarrassment I feel.

When one experiences poverty even for a day, they never forget that feeling of hunger nor the threat of homelessness. Painfully traumatic times taught me that life was going to be a bit tougher than I previously thought and that to survive, positivity, hard work, and wising up quickly was key.

For me, wild camping is a state of gratitude. It reminds me that an estimated 150 million people are homeless worldwide, sleeping outdoors in unforgiving conditions, mostly victims of life’s unfortunate circumstances.

If you’ve ever been judgmental towards a homeless person, a single parent, or someone less affluent than you try to live in their shoes for only a couple of days. Can you withstand hardship or find the courage to dream of a happy future?

Given the long-distance of the Coast to Coast, I navigate with a compact map booklet containing the entire route. I enjoy the surprise of visiting places that aren’t on this unofficial and mostly unsignposted footpath. Being lost is a situation that helps me learn how to handle stress!

How much courage it takes to make mistakes! As a society, we are scared of being mistaken but as a parent, I create situations where things go wrong. I want to share these tales with Athina, teach her that we don’t need to ‘go down’ because of it. Then she will know that it is OK for her to make mistakes too.

The North York Moors National Park is new to me. It encompasses green areas of pasture land, purple and brown heather moorland, and woodland. In 1728, famous explorer Captain James Cook was born here in a place called Marton. I pass magnificent rock crags, known as The Wainstones and Falling Foss, a spectacular 30 foot drop waterfall, lying deep in the heart of Little Beck Wood nature reserve.

Some mornings everything hurts from the previous days’ walk. At my most, I record 22 miles. My legs are becoming a little unsteady on the slippery surfaces and my general fatigue causes me to fall twice, breaking the cheap walking poles. Trekking through extended flooded moor sections is irritatingly slow. Water trapped in my boots grants me three blisters. It is clear to me the body can cope but it’s the head that interferes. All the gear is covered in mud and I resign to it; part of being out in nature involves getting muddy.

Summer in the Lakes and in Yorkshire does not mean summer gear. In total, I experience 11 days of rain and 2 days of sunshine. Prepare for bad weather because in Britain, there’s no such thing as ‘summer’. The merino base layer is worn continuously and reversed every day. Layers work best and the woolly hat and gloves prevent the loss of heat from the extremities.

Just days after Storm Ellen, when I reach the Nine Standards, Storm Francis has caught up with me. Forecasters warn of life-threatening conditions with a danger to life from flying debris, floods, and damage to buildings.

A small woman, shrinking every year, born passionate and a little over-enthusiastic, I love witnessing nature's opposing forces. I struggle on my feet against the strong rain and powerful wind. Realising it has all come down to this special moment, I break into a laugh, what an extreme month of weather!

Shadow does not share my excitement. She refuses to take another step and demands to be carried.

I forage blackberries along the way. The farmers' boxes are a great source of fresh eggs and fruit supplies. Most mornings I start my day with Nutella and porridge. Shadow and I often share chicken noodles and sausage rolls. The most disgusting thing I consume in desperate moments of shortage is dry Weetabix. If Shadow could speak she’d most definitely say her greatest discovery was the pub in Reeth that serves dogs a large bowl of ham and dog biscuits upon arrival.

My friend Andreas cycles to meet me at the end of a long day. He buys me a drink, we cook outdoors and wild camp together for the night. He confesses he brought chocolate cookies for pudding but in a moment of weakness ate them all. Tears run down my cheeks, laughing so hard is a mighty good thing for the soul!

As a ‘Life Enthusiast’, I enjoy meeting strangers and listening to their stories. An open mind is interested in others and prepared to be amazed. A young Aussie shares tales of his Coast to Coast experience in a festival tent and falling in a river during a crossing, just to discover there was a bridge 10m further up.

George, the retired serviceman walks with me one afternoon and speaks of his days in the Royal Navy traveling the world, seeing places he never dreamt of.

Steve in Gunnerside, seventh-generation blacksmith invites me in his workshop. One look at his hands and I can see his love for his trades intricacies and tradition. Like many of his long-gone relatives, Steve supplements his income through farming.

-‘May I ask you a personal question?’ he hesitates.

I smile. It’s not easy for others to understand that a comfortable bed is nice, but that there’s nothing I enjoy more than heading outdoors with a vague plan, open to endless possibilities. Nature is exciting. For some of us, the need to be out there battling the elements in a primitive state is written in our DNA.

At the end of the two weeks, I return home feeling stronger and more appreciative of the hot showers, the true joy of a moonlight night, the strength of the human spirit, and the generosity of strangers. I recall my last sleep on that cliff, listening to the North Sea waves and realise that just like the tides rise and fall, in life one should never give up, for that is the place and time that the tide will turn.

THE LAKES ARE MAGICAL

Pirates of the Canals IV

The making of Icarus

WATCHING THE TIDES ROLL AWAY

THE LAKES ARE MAGICAL

'And to the lakes I went, to lose my mind and find my soul.' Addi In 1988, Joyce left to never return- Thirty years later a stranger on t...

Pirates of the Canals IV

A growing curiosity about the Highland’s evocative waterways led to another pirate adventure affectionately known as ‘Pirates of the Cana...
{"items":["5f67ac60b8d2b2001794819e","5f5cd571300b0300170dc175","5f5cd57127884d00170498ec"],"styles":{"galleryType":"Strips","groupSize":1,"showArrows":true,"cubeImages":true,"cubeType":"fill","cubeRatio":"100%/100%","isVertical":false,"gallerySize":220,"collageDensity":0.8,"groupTypes":"1","oneRow":true,"imageMargin":0,"galleryMargin":0,"floatingImages":0,"chooseBestGroup":true,"smartCrop":false,"hasThumbnails":false,"enableScroll":true,"isGrid":false,"isSlider":false,"isColumns":false,"isSlideshow":true,"cropOnlyFill":false,"fixedColumns":1,"enableInfiniteScroll":true,"isRTL":false,"minItemSize":120,"rotatingGroupTypes":"","rotatingCubeRatio":"","gallerySliderImageRatio":1.7777777777777777,"numberOfImagesPerRow":3,"numberOfImagesPerCol":1,"groupsPerStrip":0,"borderRadius":0,"boxShadow":0,"gridStyle":0,"mobilePanorama":false,"placeGroupsLtr":false,"viewMode":"preview","thumbnailSpacings":4,"galleryThumbnailsAlignment":"bottom","isMasonry":false,"isAutoSlideshow":false,"slideshowLoop":false,"autoSlideshowInterval":4,"useCustomButton":false,"bottomInfoHeight":0,"titlePlacement":"SHOW_ON_HOVER","galleryHorizontalAlign":"center","galleryTextAlign":"center","galleryVerticalAlign":"center","scrollSnap":true,"itemClick":"expand","fullscreen":true,"allowSocial":true,"allowDownload":false,"allowTitle":true,"allowDescription":false,"loveButton":true,"loveCounter":false,"videoPlay":"hover","scrollAnimation":"NO_EFFECT","scrollDirection":1,"overlayAnimation":"FADE_IN","arrowsPosition":0,"arrowsSize":18,"watermarkOpacity":40,"watermarkSize":40,"useWatermark":true,"watermarkDock":{"top":"auto","left":"auto","right":0,"bottom":0,"transform":"translate3d(0,0,0)"},"loadMoreAmount":"all","defaultShowInfoExpand":1,"allowTitleExpand":true,"allowDescriptionExpand":true,"allowLinkExpand":true,"expandInfoPosition":0,"allowFullscreenExpand":true,"fullscreenLoop":false,"galleryAlignExpand":"left","addToCartBorderWidth":1,"addToCartButtonText":"","slideshowInfoSize":230,"playButtonForAutoSlideShow":false,"allowSlideshowCounter":false,"hoveringBehaviour":"NEVER_SHOW","thumbnailSize":120,"magicLayoutSeed":1,"imageHoverAnimation":"NO_EFFECT","calculateTextBoxHeightMode":"AUTOMATIC","calculateTextBoxWidthMode":"PERCENT","textBoxHeight":0,"textBoxWidth":200,"textBoxWidthPercent":50,"textImageSpace":10,"textBoxBorderRadius":0,"textBoxBorderWidth":0,"textsVerticalPadding":0,"textsHorizontalPadding":-30,"titleDescriptionSpace":6,"customButtonText":"","customButtonBorderWidth":1,"customButtonBorderRadius":0,"loadMoreButtonText":"","loadMoreButtonBorderWidth":1,"loadMoreButtonBorderRadius":0,"imageInfoType":"ATTACHED_BACKGROUND","itemBorderWidth":0,"itemBorderRadius":0,"itemEnableShadow":false,"itemShadowBlur":20,"itemShadowDirection":135,"itemShadowSize":10,"imageLoadingMode":"BLUR","expandAnimation":"NO_EFFECT","imageQuality":90,"usmToggle":false,"usm_a":0,"usm_r":0,"usm_t":0,"videoSound":false,"videoSpeed":"1","videoLoop":true,"gallerySizeType":"px","gallerySizePx":220,"allowContextMenu":true,"galleryLayout":5,"arrowsColor":"rgba(0,52,72,1)","selectedLayout":"5|bottom|1|fill|false|1|true","layoutsVersion":2,"selectedLayoutV2":5,"isSlideshowFont":true,"externalInfoHeight":0,"externalInfoWidth":0},"container":{"width":220,"height":354,"galleryWidth":220,"galleryHeight":123,"scrollBase":0}}